October 21st is sort of an “anniversary” for me & Mr D.  We met 4 years ago that day.  I crashed a party, he asked me out for the next day, yada yada yada, we’ve been together ever since.

Mr D. proposed on Valentines Day, and we got married on July 14, 2007.   It was a short courtship, granted.  When something feels right, it’s just right.  Opinions might be that we rushed into marriage, we really did, but just not the way you think.

It was a perfect July day, not a cloud in the sky, and not hot.  Since Mr D. and I had both been married in the “church” before we opted to tie the knot in Bloomington, Indiana at Beck Chapel.  The plan was for Mr D to head out early with the boys to pick up a few things before the wedding, I was to drag the girls out of bed and head out to get our hair done before making the drive to Bloomington for the 2:30 “I Do’s”.

Isn’t there always a snag?  Even when you have the best intentions, especially on your wedding day?  The kegs were iced down and the tubs leaked.  The bouncy house had a hole in it and it had to be emergency patched.  My step-daughter Sam, who knew she had that much freakin hair?  So we were both running a tad behind.

Down S.R. 37 to Bloomington there isn’t a lot to look at.  Pretty much a stretch of empty nothingness.  I had my friend from Michigan and Mr D’s daughter’s in the car with me.  There’s this hill, right before you get to the first exit in Bloomington.  If you’ve even been to Bloomington you know exactly where I’m talking about.  The first exit was my exit.  I reached the top of the hill seeing my exit destination and watching the clock, I was cutting it close.  I didn’t even see the cop.

I was in the zone, I didn’t even hear my friend the first time when she said, you’re getting pulled over.  The second time, I heard her.  What – are you freaking kidding me?  It wasn’t a joke, I saw the lights behind me and eased over to the shoulder of the road, heaving a heavy sigh looking at my exit damn near in front of me.

I’m thinking.. I’m good, I’ll just explain to the officer that it’s my wedding day and I’m running a tad behind, he’ll let me go.  The officer, I found out later, gives out more tickets than any officer in the State, he gets awards and stuff.  So he wasn’t moved by my upcoming nuptials.  $150.00 and 15 minutes later, I’m back on my way to my wedding, which now, it’s a toss up if I’m getting there by 2:00.  None of us are dressed, I’m pissed, it’s not a good scene.

I called Mr D, he didn’t answer.  I called my parents to tell them what happened and to see where they were.  They were running a tad behind as well, which was very uncharacteristic of my Dad.  “Did you tell him you were getting married” is the question I got.  DUH…

Pulling into the lot at Beck, trying my best to not sweat off my makeup because of stress, running into the Chapel, down to the brides room, I got the call.

However, Reverend Emerson was very charming when he said “I’ve heard of people rushing into marriage, but this is ridiculous.” 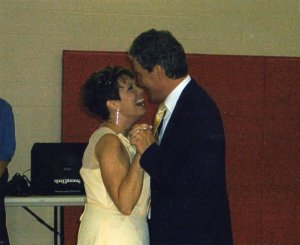 Filed under: Favre You — stepheppichdaily @ 4:19 am

We knew it, my Dad and I.  We predicted it.  We knew someday this day would come.  We thought that day would be in 2008.

Brett Favre and Randy Moss on the same team, in green and gold.  It was going to happen.  Especially when Favre had come off a phenomenal season, falling short of the Superbowl, loosing to the Giants in the NFC Championship game.  Packer fans had no doubt that Favre would return for one more year.  In the beginning  of that season Randy Moss was a free agent.  Rumor in Green Bay was that Favre did everything short of beg GM Ted Thompson (who will be referred to jackass or TT from now on) to pick up Moss.  Favre even said he was willing to give up part of his salary in order to get the receiver.   Favre is the ultimate competitor.  He came so close to the Superbowl he could taste it.  One more receiver and one more chance was all he needed to make his dream come true, then he could hang it up, gracefully.

The jackass said no.  The fact of the matter is TT was tired of Favre.  He had picked up Favre’s replacement years ago and was tired of seeing Aaron Rodgers (his golden boy) play wet nurse to a MVP quarterback.  I’m sure it was a “I’ll show you whose boss” type of situation.  TT probably had Favre’s locker packed and shipped to Mississippi before they agreed to disagree.

So on March 4, 2008 Brett Favre retired from the Green Bay Packers.

When significant things happen in our life we tend to remember where we where and what we were doing when the event happened.    I was working when I got the call.  A friend of mine that worked for the Colts called and said, Favre’s retiring, the press conference is in an hour.  I hung up the phone and   looked around, shut off my computer, left a note to my Mom (who works for the company), and drove to Chammps downtown in disbelief.  Watching the press conference I saw a man that was doing something he did not want to do.  I sat there and said, there’s no way this is over.  My Dad later ranted about TT, what a jackass he was.  “He’s ruined this team” he would say to me.

So Dad and I decided to take our trip up to Green Bay anyway to see the pads practice again.  My Mom and Kerry went with us.  Anyone who is a football fan, whether you like the Packers or not, should go to Lambeau field at least once.  It’s a truly fantastic facility.  We went in August, right before school started, and we had the free time.  Plus it was pad practice time.  Dad tried to convince me that AR would be a great backup for Favre. I wasn’t buying it.  Then all of the sudden these ESPN/Media Trucks started showing up.  Wake up the next day and this is under your door:

He’s here! Favre is back in Green Bay willing to try out for his position.  He’s there, he’s ready.  Me and my Dad were there giddy with anticipation to see Brett tear apart  AR on the field.  When we got to the practice field the media trucks were packing up.  Practice started, no sign of Brett. The Packers wouldn’t let him even practice, not even compete for the position that was his for so many years.  Brett had gotten back on a plane and headed back to Mississippi.

By then, the New England is rockin with Moss.

Brett decided to go to the New York Jets. Not his first choice, he would have preferred the Vikings from the very beginning, for some reason, that just wasn’t an option.  According to the Packers part of his release stipulation was Favre could not play in the same division as the Packers.  Whimps.  You don’t want him, but you don’t want to play against him?  Well, we all  saw what Favre did to Green Bay later, enough said.

So we’re back to the so close season last year, loosing again in the NFC Championship game.  Will or Wont Favre play?  In the back of my mind I knew he was coming back. The real answer came for me when he had his ankle surgery.  He’s come too far to not have one more chance.  Starting off slow, loosing some players, the offense doesn’t seem to be in sync, Favre’s childlike play even seemed to be flat. The Vikings needed a spark.  Randy Moss hates the new quarterback coach in NE, he’s ready for a change.  See the stars getting closer together?

They’ve always wanted to play together.  Favre, a gun slinger, Moss,he can catch anything you throw up to him.  When I heard the rumor that Moss might be returning to Minnesota, it was like watching a plan that had formulated over several years finally come to fruition.  Yesterday when the deal was done I was elated, and sad at the same time.  Why couldn’t have this happened in Green Bay.  Why all the turmoil?  It doesn’t matter now, because  it’s happening in Minnesota.

What better way to make your debut comeback? Monday Night Football.  Randy Moss comes back to the place where he began his career, and Favre has the receiver he finally wants.  Realistically, this will probably be Favre’s last year.  He has the weapons with Moss, Peterson, Harvin, and Rice (returning in a few weeks) to make it really fun, and count.  He can see the Lombardi Trophy in his hands.  How do you like that Green Bay?

Like most things.  I wish my Dad were here to see this. It would have been nice to be able to talk to him about this.  The pain I felt not being able to pick up the phone and call him.  In a word, sucks.

It’s going to be a helluva game Monday.  Get your popcorn ready.